Anyone can put mustard on a sandwich, so be creative and go Wild with Moosetard. Use our mustards to make a glaze for roasts and fish. Substitute it for your usual mustard in potato, noodle and egg salad dishes. Dress up your bratwurst and other sausages with your favorite flavor. Mix it with mayonnaise or cream cheese to make a tasty spread in a tortilla wrap. Even tofu dogs and garden burgers get rave reviews from non-vegetarians with a little of our mustards. Fairbanks locals enjoy it on game meats, such as moose, bison, caribou, duck and grouse.

These are some recipes from family and friends. If you find something new to cook with Moosetard let us know, we would be glad to share it with our visitors.

Mix well, then refrigerate for an hour so the flavor sets in. Serve as a dip or spread. We like to put it into sandwich wraps or spread on slices of a baguette topped with either a slice of cucumber or tomato. The Alder Smoked mustard is the most popular to use. We make it into a cheese ball during the holidays and roll it in crushed caramelized pecans. If you use the spicy mustards we recommend also adding a small can of crushed pineapple to keep the heat from dropping too much.
– Kasha Ostbloom

You can also mix shrimp and crab with chopped green onion with the cream cheese mix and stuff wontons to make Moosetard Rangoons.

Preheat oven to 375 degrees. Melt 2 TB butter in medium skillet over medium heat. Add onion and saute until brown, add pear and saute for another 3 minutes. Transfer to bowl and allow to cool slightly. Stir in cheese, mustard and salt. Melt remaining butter in small sauce pan or in a microwave safe bowl for 30 seconds on High. Place phyllo sheet on work surface. Keep remaining phyllo in a gallon Ziploc to prevent drying. Brush with melted butter then place second sheet of phyllo on top. Brush top layer with butter then arrange pear mixture along short end of phyllo in a log stopping 1 inch from ends. Fold on sides and roll up tightly into log. Brush all over with butter. Place on large baking sheet and repeat with remaining phyllo and pear mixture. Bake until golden brown, about 18 minutes. Allow to cool for 5 minutes then slice each strudel diagonally into approximately 12 pieces. This strudel can be made a day in advance and refrigerated until ready to cook.
– Moreen and Janice

Place eggs in saucepan covered with water and bring it to a boil over high heat. Allow eggs to boil for 10 minutes. Remove from heat and run cold water over the eggs then let sit until cool (we add ice to the water to cool the eggs faster). Peel eggs and cut in half lengthwise. Place whites on platter and yolks into a bowl. Mix yolk and remaining ingredients (if you find mixture to be a little dry add another spoon of mayo or two until creamy). Fill mixture back into egg whites and serve. Ginger Birch, Curried Apricot and Alaska Wildfire are our favorites.
– Paul Ostbloom

Put peas, eggs, onion and cheese in large bowl and set aside. In a smaller bowl, mix the remaining ingredients until well blended. Pour over peas and stir until evenly coated. Can be served immediately but tastes better if refrigerated for a couple of hours.
– Kasha Ostbloom

Preheat oven to 350. Mix oil and Moosetard then baste roast. Cover with tin foil and cook for two hours or until meat falls apart.
– Deb Cotton

Lightly mix ingredients and form a loaf. Place in bread pan and bake at 350° oven.

Grease baking dish with spray Pam and pre-heat oven to 350F. Melt butter and stir in Parmesan cheese and lemon. Cut halibut into 1/2 inch thick portions and roll in butter mixture then roll oiled halibut in breadcrumbs until coated. Bake in greased dish for 20 minutes. Remove from oven and generously spread sour cream mixed with Moosetard on the top and sides of halibut fillet. Sprinkle with Cheddar cheese. Return to oven and bake for an additional 20 minutes or until fillet is done. Sour cream should be slightly brown.
– Fred Villa

Spread Moosetard over salmon then place a layer of sliced onions over the top. Grill or bake salmon at 350F for 45 minutes. Baste Salmon with drippings several times while cooking.
– Kasha Ostbloom 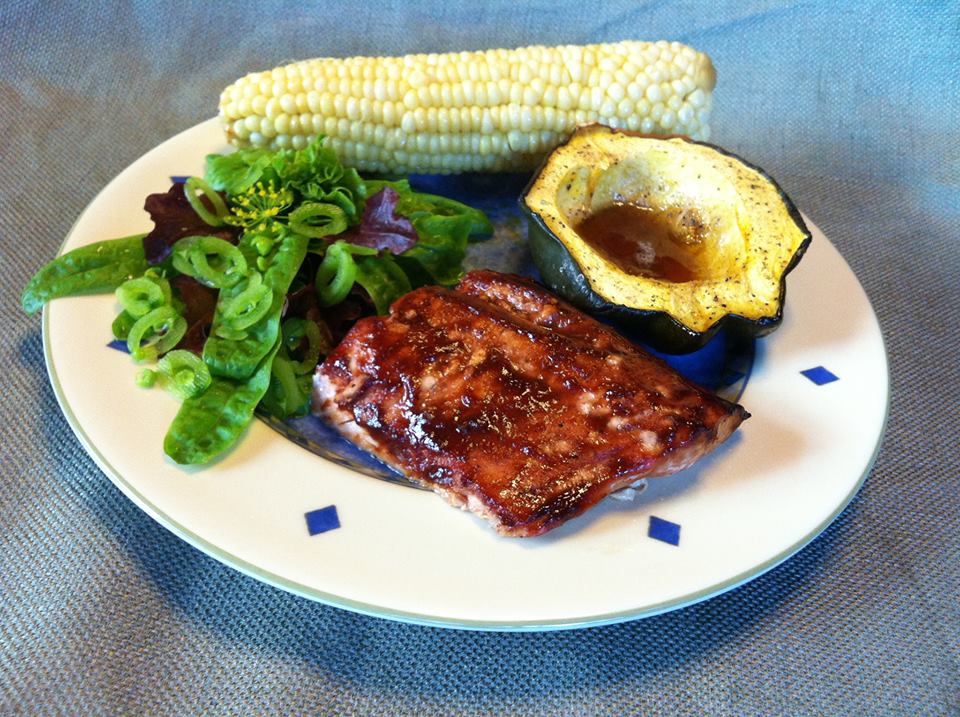 Brown chicken breasts on both sides in large skillet. Melt butter in sauce pan. Blend flour into milk. Stir mixture into butter and continue to stir on medium heat. Continue until mixture starts to thicken and add spices. Pour Cranberry Sauce over chicken and let cook on low for 10 minutes. Serve chicken with sauce over bed of wild rice or pasta. Garnish with fresh cranberries.
– Kasha Ostbloom

Spread softened butter on one side of both slices of bread. Spread Moosetard on opposite side of one slice. Place Cheddar cheese inside sandwich with buttered sides out. Fry over medium hear until brown on each side. Eat.
– Anna Villa, age 10

Slice sausages and thread onto skewers alternating sausages and fruit. Mix oil and Moosetard then brush onto kabobs. Refrigerate for 1-2 hours then grill.
– Kasha Ostbloom

Cut your onion like a blooming onion, making slices from top to bottom without cutting all the way through the bottom. Put either a pat of butter or brush the top with olive oil. Put one spoonful of any Moosetard on top. Place in the center of a square of tin foil and pull the corners to the center and twist the top. Place on the grill or in the oven with your roast for approximately a half hour until it’s soft and slightly browned.
– Kasha Ostbloom

Heat olive oil in a skillet and brown the pork chops on both sides. Top each chop with a spoonful of Porter Moosetard and spread it evenly. Place 1/4 of the peaches on top of each chop. Turn the heat down to low and cover. Allow to simmer for about a half hour.
– Gretchen Pearce

Cook potatoes (need 6 cups when cooked and quartered), eggs and bacon. In a large bowl – combine the ingredients and gently mix. Cover and allow the flavors to mingle for a few hours in the fridge.

Heat a little bit of oil in a pan and in the onions, celery and carrots until the carrots are just barely tender. Add the broccoli, zucchini and peas. As soon as the broccoli starts to turn dark green add the Moosetard and quickly mix it in.
– Lori Chase

Mix eggs and milk or cottage cheese in a bowl. Spray pan with cooking spray, saute onions and peppers on medium heat (if it starts to get too hot sprinkle a little water in). When they start to soften and onion become clear place to the side on plate or in bowl and mix in Moosetard. Wipe out pan, spray again and return to medium heat. Pour in egg mixture, cover with lid and reduce heat. When eggs start to become solid sprinkle with cheese and onion/pepper mixture. Cover again for 2-3 minutes. Use spatula to flip one side of egg onto the other.

For a healthier version exchange the eggs for Egg Beaters, the milk for 1/4 cup non fat cottage cheese and the cheddar for 2 slices of a lite Jarlsberg.
– Rebecca Mulholand

Preheat oven to 450F and bake ribs in shallow pan for 30-40 minutes. Meanwhile, cook onion & garlic in a little olive oil till tender. Add next ingredients to 2 C measuring cup (so you can measure as you go) and whip or stir till blended. Add to skillet and simmer for ten minutes.

Turn oven down to 350F. Drain off excess fat from the pan of meat. Clump onions/garlic from sauce onto ribs evenly and pour remaining sauce over all. Bake 1 1/2 hrs or till well done, brushing occasionally with the sauce.
– KC McDonald

Moosetard Chili for a herd

Preheat oven to 475F. Cut potatoes in half lengthwise, scoop out about half of potato out leaving at least 1/4 inch shell. Combine oil, salt and pepper. Baste potatoes with oil mixture and place skin side up on baking sheet. Cook for 7 minutes; turn over and bake an additional 7 minutes. Spread 1 tsp of Moosetard inside each potato. Top with bacon and cheddar cheese. Bake for another 2 minutes or until cheese melts. Top with sour cream and onions.
– Grandma O.

Preheat oven to 350F. In a medium size bowl, combine honey, mustard, salt and pepper. Add chicken thighs; stir until thighs are coated with glaze. Grill or bake chicken at 350F for 20-30 minutes. Serve chicken on a bed of wild rice with side of fresh garden salad.
– Lori & Michael Fine Ottawa, Canada

Chop the bacon into small pieces and fry till it’s the way you like it, add the Moosetard (Careful it spits) Stir quickly covering the bacon in Moosetard lift out the bacon and put onto salad, quickly stir the stuff in the pan then pour over the salad. . . . . . . . . and eat.. . . . . . . it is great.
– Annie Taylor, Northunberland, England

Use to make oven fries
Seasoning steaks, and burgers
Add crushed pepper and brown sugar to make a dry rub for ribs
Season fish like salmon or halibut (use with a little oil for halibut and other white fish to retain moisture)
Sprinkle on tomatoes or cucumbers

Preheat oven to 400F. Toss veggies with olive oil and place in roasting pan, sprinkle with salt and cook for 25 minutes or until asparagus becomes tender. The veggies can also be place in a foil packet and put on the grill or in a grilling basket.
– Kasha

Peel squash, cut it in half and remove seeds. Cut into steak fry size slices. Drizzle with olive oil or use spray oil and toss to lightly coat. Spread on baking pan and sprinkle salt over fries, cover with foil and bake at 400 degrees for 25 minutes. Uncover and bake another 10 minutes or until starting to crisp and brown.

Place pork loin in crock-pot, sprinkle sugar and salt over top. Cook on high for about 5 hours or until pork falls apart.
– Kasha Ostbloom

Cut your onion like a blooming onion, making slices from top to bottom without cutting all the way through the bottom. Put either a pat of butter or brush the top with olive oil. Crack some of the sea salt on top . Place in the center of a square of tin foil and pull the corners to the center and twist the top. Place on the grill or in the oven with your roast for approximately a half hour until it’s soft and slightly browned.
– Kasha Ostbloom

Toss ingredient together and refrigerate for 1/2 hour before serving.
– Kasha

Cut avocado in half and remove seed. Slice into strips and remove from shell. Arrange slices like a fan on the plate and drizzle sauce back and forth over it. Or if no one is looking just pour the sauce in the halfshell and eat it.
– Kasha

Toss all ingredients together until lightly coated with sauce. Refrigerate for an hour prior to serving.

Marinate chicken cubes in Teriyaki sauce for about 3 hours. Cut veggies into chunks. Alternate chicken and veggies on kabob sticks and grill. Baste three or four times during grilling with sauce. (if using wooden sticks soak them in water for about 10 minutes prior to use to help keep them from burning)
– Paul Heggem

Clean outer layer of leaves off cabbage. Core out stem and pull leaves apart to create a “bowl”. Place veggies in the hollowed out area. Pour Teriyaki sauce over veggies and wrap entire bowl with aluminum foil. Its best to put a couple of extra layers on the bottom. Grill over low heat or roast in the oven at 350 for 2 hours or until potatoes and cabbage are tender.
– Janet Carter